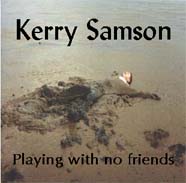 For my first solo albums, “Playing With No Friends” and the follow up “Proud To Be A Failed Waiter”, I wanted to come up with a  new name, partly in an effort to reinvent myself but also because I’d heard there was someone else releasing music as Michael Jackson, though I’ve no idea what became of that guy.  The first name Kerry I chose partly in homage to Slayer’s guitarist Kerry King, then Samson was pretty much a random surname I chose to go with it.  Kerry stuck, Samson did not.

These albums got a decent reception at the time and I sold enough copies to keep my CD burner, printer and scissors busy  (for those who’ve grown up with CDBaby and Bandcamp, that’s how we did self releases back then).