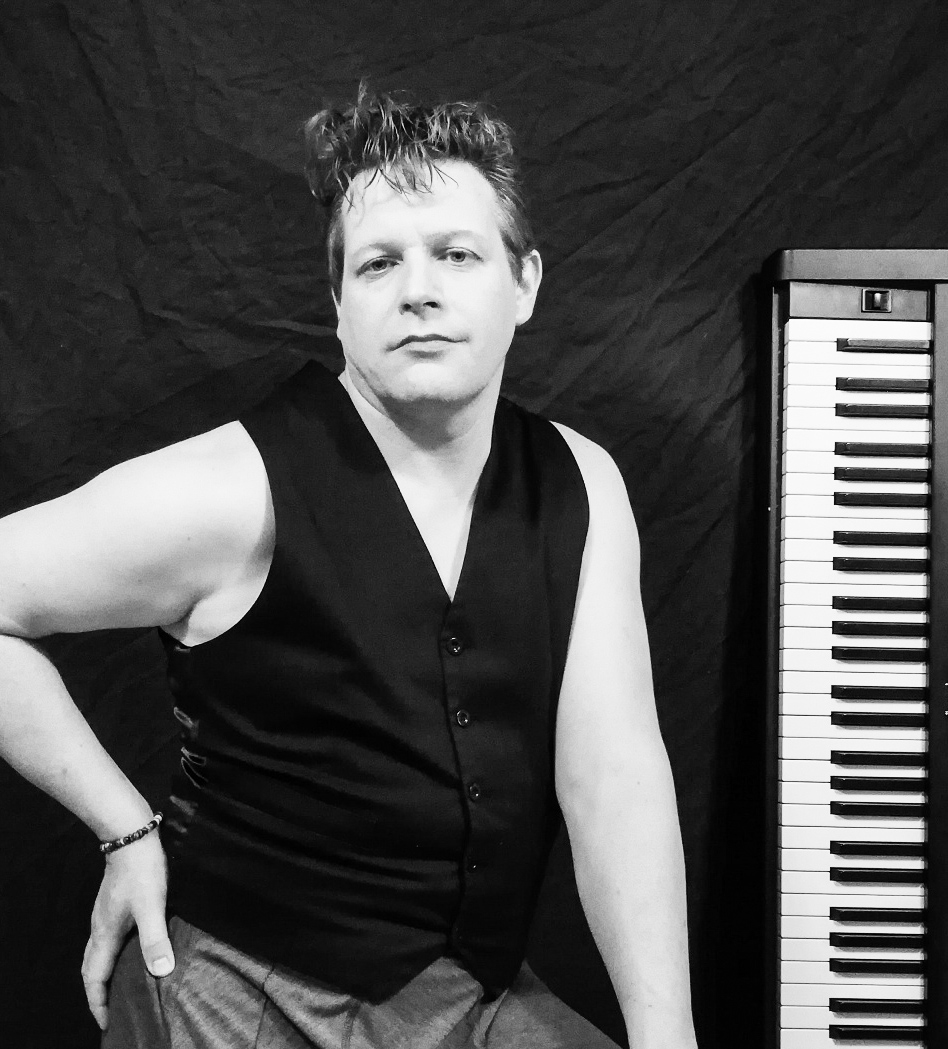 I first started piano and violin lessons aged 7, later giving up the latter instrument in favour of alto saxophone when I discovered jazz through a stack of LPs given to me by a relative. I spent my formative years playing and singing everywhere I could and went to Leeds College of Music in 1995 to study jazz. I was also a fan of metal (especially Iron Maiden and Slayer) but lacking guitar skills I didn’t do much about that at that time, mostly producing jazz and electronic music.

After graduating, I worked as a jobbing musician doing piano vocal in restaurants and touring with James O’Hara’s blues band The Detonators, before realising that the mercenary existence of playing for a living was removing everything I ever loved about expressing myself through music. I began teaching singing and music so I could play and write on my own terms, also I became heavily involved in the Northern goth, open mic and alternative cabaret scene, developing guitar skills along the way.  I toured and made two albums with gothic industrial band Zeitgeist Zero and also developed a sideline as a singing magician and escape artist.

When I moved to Northampton in 2009 I went full time into the classroom, but eventually found that while teaching music and other subjects suited me, being Mr. Jackson the institutional authority figure did not. So now I’m back on the fringes as an independent artist.

‘Unsigned’ suggests it is the goal of every musician to find a record company to take charge of them like a maiden longing for a husband, even an abusive one. I hold no grudges about record companies or those who sign to them – I just see it as a business decision rather than a necessity and, for various reasons, not the right path for me.

First of all, signing to a subsidiary of the big 3 majors is important if your objective is to become a star. If that is your ambition and you are willing to dedicate your all to accomplishing it, your chances of cracking the mainstream are still next to nil without the support, investment, promotion and professional advocacy that comes with being signed to a major. I however am not motivated by fame or celebrity, more repelled by it – as far as I can tell it would involve giving up far too much personal and artistic freedom, whatever the financial compensation.

Secondly, I happen to be a very difficult artist to market. My music is too weird and eclectic to fit a reliable marketing strategy and I am drawn to niches and ideas I find interesting rather than ones that are profitable.  I like to challenge listeners with my lyrics and when I do find myself in a particular scene (I have passed through a few, most significantly jazz and goth circles) I have a knack for doing whatever is most unpopular and unfashionable within that scene. I don’t aim to, I’m just really bad at fitting in and most admire artists who are as willing to take on their immediate peers as the commonly agreed ‘enemy’. That I am now over 40 years of age would also have to disqualify me as a rocking teen sensation. In short, if I were an A+R representative at a major label, I would not see me as a good investment.

As an independent artist I am free to make the music I wish, on the topics I choose, to express myself honestly and stand next to the results. The internet has made it possible to accomplish all this in way not possible twenty years ago.

See above. Especially the part about being motivated by expression rather than fame.

Who are your influences?

Many and varied, you’ll likely get a different answer from me on any given day, but people who have particularly influenced me include Duke Ellington, Herbie Hancock and McCoy Tyner for piano, Thomas Dolby, Vince Clarke and Johnny Violent for electronics, Paul Simon, Justin Sullivan and Tom Robinson for songwriting, Bobby McFerrin, Sam Brown, Tina May, Bruce Dickinson and David Coverdale for singing and Frank Zappa and Django Bates for composition. Over the years I’ve also worked with and learned from many fantastic musicians, some of whom are credited on my ‘past projects’ pages.

What’s with the whole ‘genderfluid’ thing?

To be genderfluid is to identify and present beyond traditional binary gender definitions.

I’ve never been comfortable in a conventional masculine persona, have a very pronounced feminine side and find much of what passes for gender definition to be based on arbitrary and often destructive values. My early gender explorations took the form of mild cross dressing, although I would from time to time go all the way into a female identity (particularly as a performer –  I’ve had numerous female/drag identities onstage) I was happiest incorporating skirts, dresses and feminine aspects while just being myself, taking an androgynous, in-between approach. I often stated that had I been born a girl, I would probably have dressed as a boy.

Even in full drag I’m no sissy girly-girl, but then neither are any of the women I admire.  This occasionally has caused friction within the trans scene, where someone once tried to insult me by sarcastically calling me a “tomboy transvestite”, but I loved that description so much I used it for years.  Back then, the term ‘genderfluid’ did not exist (early versions like ‘genderfuck’ did but were unsatisfactory – I didn’t like the suggestion that this is all about shock), but now the term genderfluid suits me perfectly – not so much a rejection of gender as refusal to be limited by it.

Pronoun-wise (he, she, they, zhe, xhe etc.) I answer to whatever suits how I’m presenting at the time, but don’t really get hung up over it.  Anyone trying to upset or demean me by deliberately misgendering will need to try a lot harder.

So when are you getting the op? (actual frequently asked question)

I have explored my gender identity enough to know that my place on the transgender spectrum does not necessitate, nor would be aided by, gender reassignment surgery. I am a passionate advocate for transgender issues and support and respect those who do need to transition fully, but in addition I believe it important to understand that a person’s choices about their gender presentation are a lot more complex than to either commit to invasive life changing surgery or shut up and conform to a conventional binary identity they may not be comfortable with.

Are you a Christian artist? / Stop cramming your beliefs down my throat, you jerk!

I’m really just an artist. Though I try to have an overall positive (if sometimes satirical) message, mostly it’s about encouraging people to think openly and find the courage to be themselves rather than pushing a religious agenda, any religious language in my lyrics should be seen simply as a point of view.

Mostly my beliefs are that every religious viewpoint is an attempt to quantify and understand something far greater and intangible than any of us are equipped to process. We can break down bits of it and develop scientific understanding, but to be absolutely certain of anything (and especially to use that certainty to attack others) to me is an act of supreme arrogance that theists and atheists alike can be guilty of.

Do I believe in God? Yes, but probably not the one you’re imagining right now. Do I take every word of the Bible literally? Absolutely not, if it was meant to be read that way Jesus wouldn’t have spoken in parables and the worst thing that ever happened to the Bible is when it was broken up into a bunch of neat, numbered quotes to be presented out of context as Absolute Truth. Do I believe Jesus Christ rose from the dead? I choose to, on the basis of what that stands for. Do I reject science? Absolutely not, nor do I see science and religion as enemies, just ways of exploring the tangible and intangible, respectively.