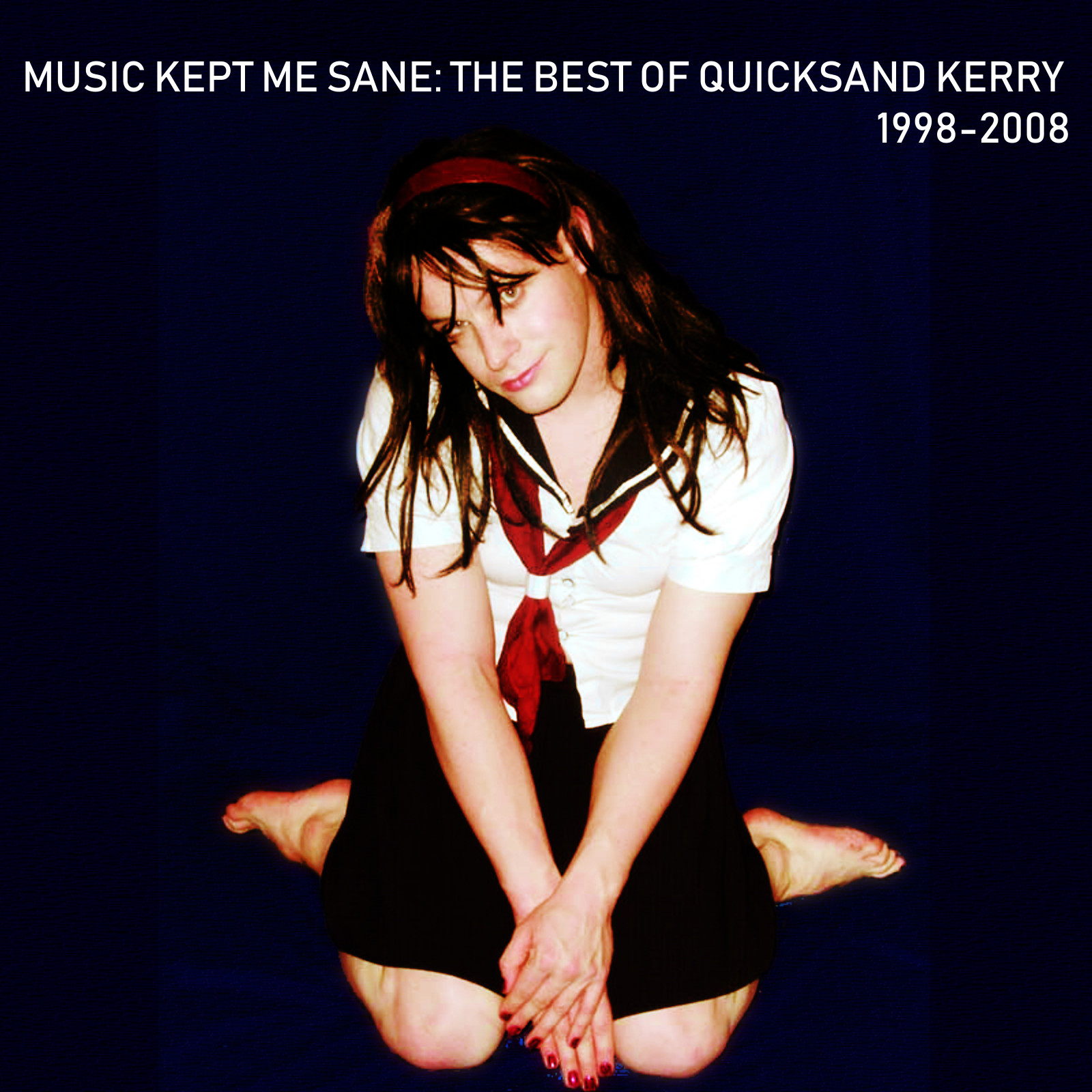 Quicksand Kerry is the name and persona I settled into during the ten year period between 1998 and 2008, a time highlighted by expressions of gender fluidity, forays into DIY performance art and gothic industrialism. This album is a compilation of music recorded in various guises during that time, remastered in 2019.

I first wrote and recorded this in 2001, with the Ladykillers’ ‘Electric’ James Martin guesting on lead guitar. It then went through assorted remixes, overdubs and additional programming before I settled on this final version around 2003.

This is not a heavyweight lyric. As a discussion of mental health it’s on the level of They’re Coming To Take Me Away Ha Ha, but I picked it as the title track of this retrospective because music really is one hell of a coping mechanism – there’ll be more honest expressions of my emotional foibles on the coming tracks.

Kerry Samson was my first recording and performing alias (Kerry stuck, Samson did not), under which I self-released two solo acoustic albums Playing With No Friends and Proud To Be A Failed Waiter. I no longer have suitable master files from those albums, so here is an early foray into digital multitrack recording (combined audio and midi in home computer sequencers still felt revolutionary in the 1990s).

This was the theme song for a series of messy transgender skit videos I made with a group of friends. The lyrics aren’t particularly deep, but the title was inspired by a line in Neil Gaiman’s Sandman comics, “…neither male nor female, because Desire could never be satisfied with just one gender”. This quote came to define much of my gender identity at a time when non-binary had yet to be established as a grouping and all you could be was transvestite, transsexual or drag queen.

From the 2000 album “Sick Parody of Normality”, this is a sarcastic statement on the rejection of conformity.
For this retrospective, I had to clean up the audio a lot on this one – audio processing wasn’t my strong suit back then and there were a lot of signal and EQ problems.

Recorded in a single take on each instrument (organ, guitar and vocals over programmed drums), this is from the point of view of a dysfunctional, abusive and justifiably dumped protagonist.

I later wrote a sequel from the point of view of his aggrieved former partner – Nothing For You Here appears on the Jenni Bluish No Fury EP.

Excretia (singer Felicia Devile and her guitarist boyfriend Darrel Pthisis) was a gothic drag act and affectionate pastiche of the witchy gothic rock I was listening to at the time. It was very much what it was, but Felicia was my first full femme stage persona and I still like some of the music I made under this guise, even if the vocal style was underdeveloped.
“Despair” was one of the more serious tracks on Excretia’s mini-album “Witching Hour”.

Composed as incidental music for a sword box illusion routine with Devilish Deeds, a magic act I rehearsed and performed with a dancer friend.

Darkwave project Miles From Anywhere was one of my first full scale multitrack recording vehicles, the album Ending was distributed by Peoplesound in 1999. I was in a bad place mentally at this time – I’d been unable to play for a while due to a bout of tendonitis, severely affecting my livelihood. I was also developing severe anxiety around my identity, the struggles of life as a jobbing musician and the feeling of my music not belonging to myself anymore.

The second side of the album featured some particularly dark moments which I’m not sure I want to revisit. Thinking is fairly measured in comparison to those cuts, an exploration of depression-induced paranoia and distrust of those that would help.

Also from the Ending album. My progressive jazz background accounts for the irregular time signatures that put paid to the track being played in the goth clubs that inspired me, but the stilted rhythms just worked too well to dispense with.

A song about the awkward and dangerous time of life when the thrill of exploring the adult world combines with childish eagerness to please and need for attention. I experienced some of this on my way out of the trans closet (when you’re made to feel your identity is wrong and fetishistic it can leave you vulnerable to predators), but I knew that my experience was nothing compared to that of the girls I’d known from the alternative club scene.

The line “she wants to know about what she’s read in all the magazines” was inspired by a young singer songwriter I saw at the Duchess of York in Leeds. In the audience I found myself stood next to the singer’s Mother, who beamed proudly as her teenage daughter sang angsty songs about rape, drug abuse and other sinister life experiences. I asked the Mother if she was worried about the choice of lyrical motifs, to which she replied, “she reads a lot of magazines and has a great imagination”.

Though I have spent a lot of time presenting as a girl, I realised early on that full transition was not my path – I often said that had I been born a girl I would probably have dressed as a boy. Though the term had yet to be popularised at that time, this is non-binary identity in a nutshell.

A question that sometimes gets asked in trans forums is, “If you could only express one gender ever, which could you live without?”. Personally I would 1) demand to know who is defining and policing this arrangement and 2) rebel on principle.

“Don’t Want To Choose” is not only about gender identity, but every instance where you are forced into arbitrary choices to fit roles assigned by others. This is the first recording I made of the song, I later re-recorded it for the 2015 album “Songs From the Age of Human Error”, which was in turn was remixed for the 2017 EP “Only Robots Need To Think In Binary”.

A piece of silliness that came about during an improvised rock jam at the Primrose in Leeds. As I recall, the chorus structure and story pretty much came to me on the fly, I then went home and wrote it out as a proper draft.

First appearing on the 2000 album Sick Parody of Normality, this fanciful yarn became my signature song. I have often been criticised for smiling too much (I can’t help it, I have that kind of a face) so this is kind of a rebuke to that.

Reading it back now, I guess the “angry young man” antagonist is a personification of my own insecurities, though I didn’t give it that much thought at the time. In any case, this sums up my mission statement throughout my time as Quicksand Kerry, a period during which I dealt with anxiety, depression and alienation by embracing misfit identity and just being myself.

Never stop smiling, and don’t care what they think. Released as a cut-price “official bootleg”, this is a full solo piano & vocal set recorded at the Ivy House, London on 2nd August 2018.  Currently downloadable from Bandcamp (Flac download recommended to avoid gaps between tracks) and streamable on Spotify and Deezer.

This gig was promoted by Vanishing Point, cover photographs by Paul Cook.